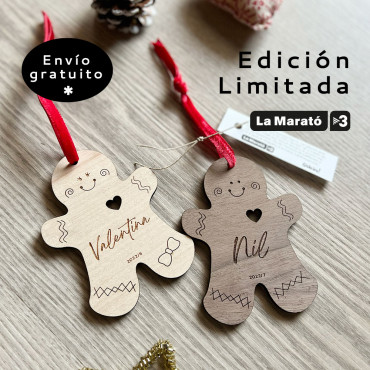 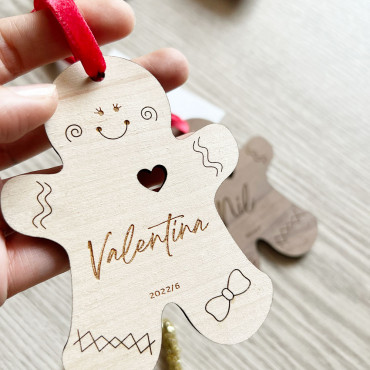 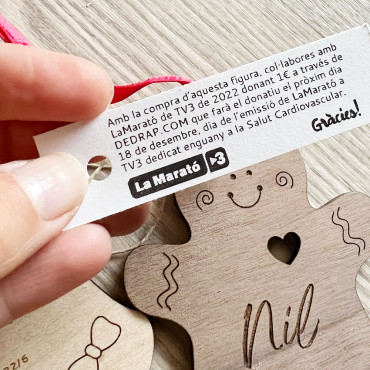 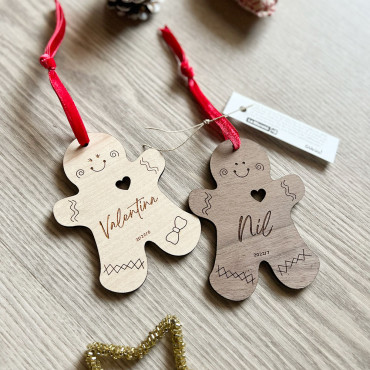 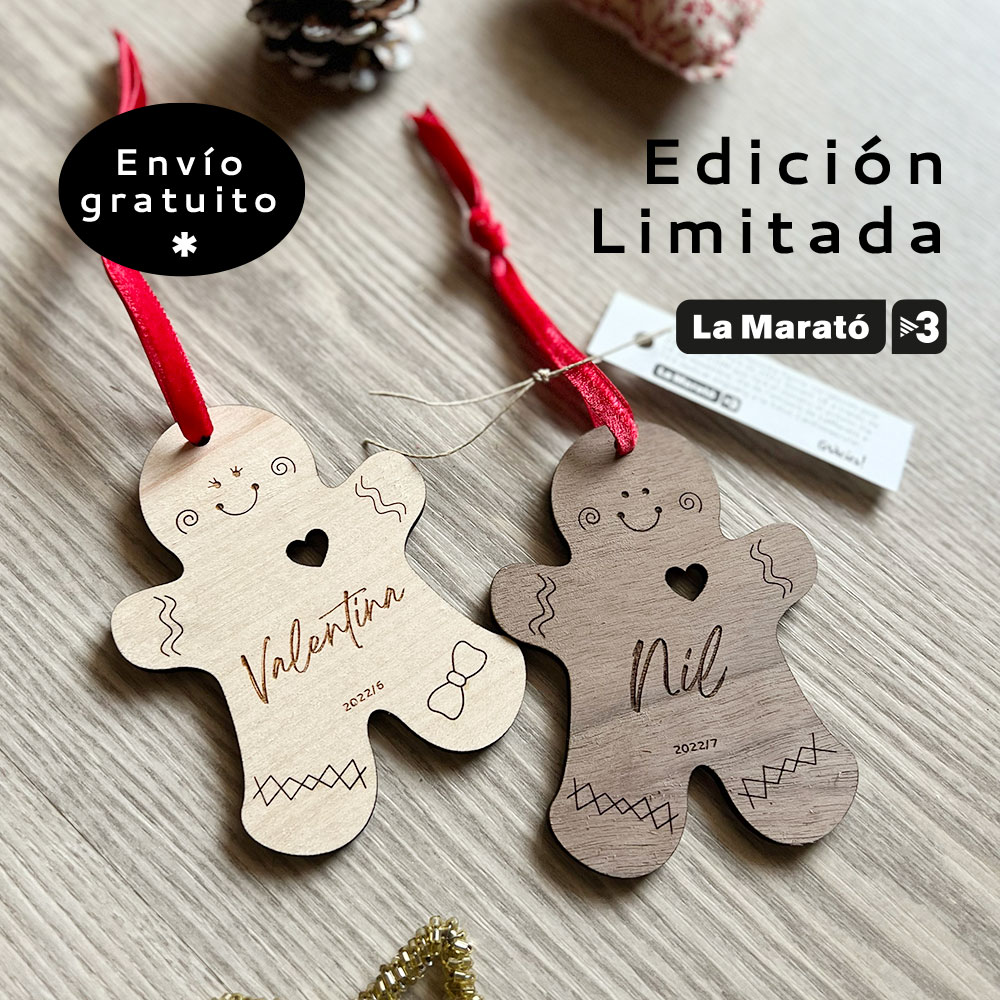 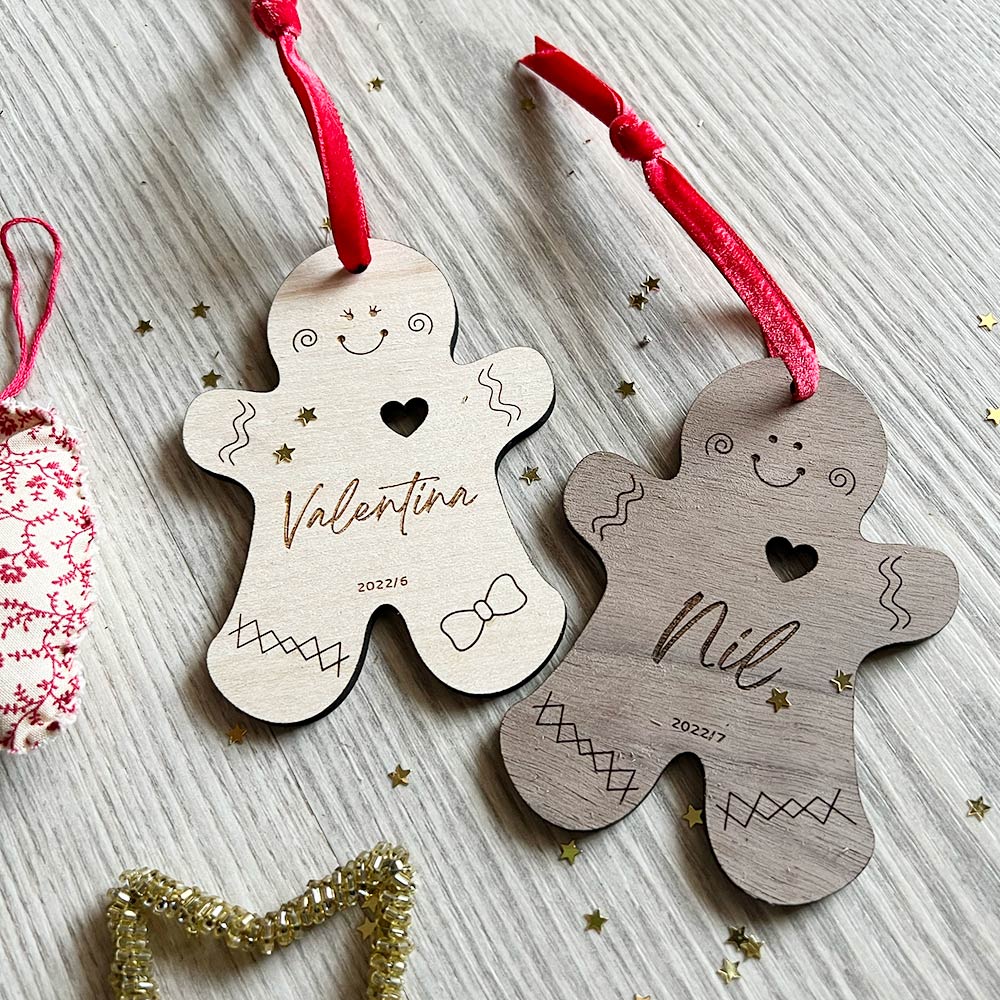 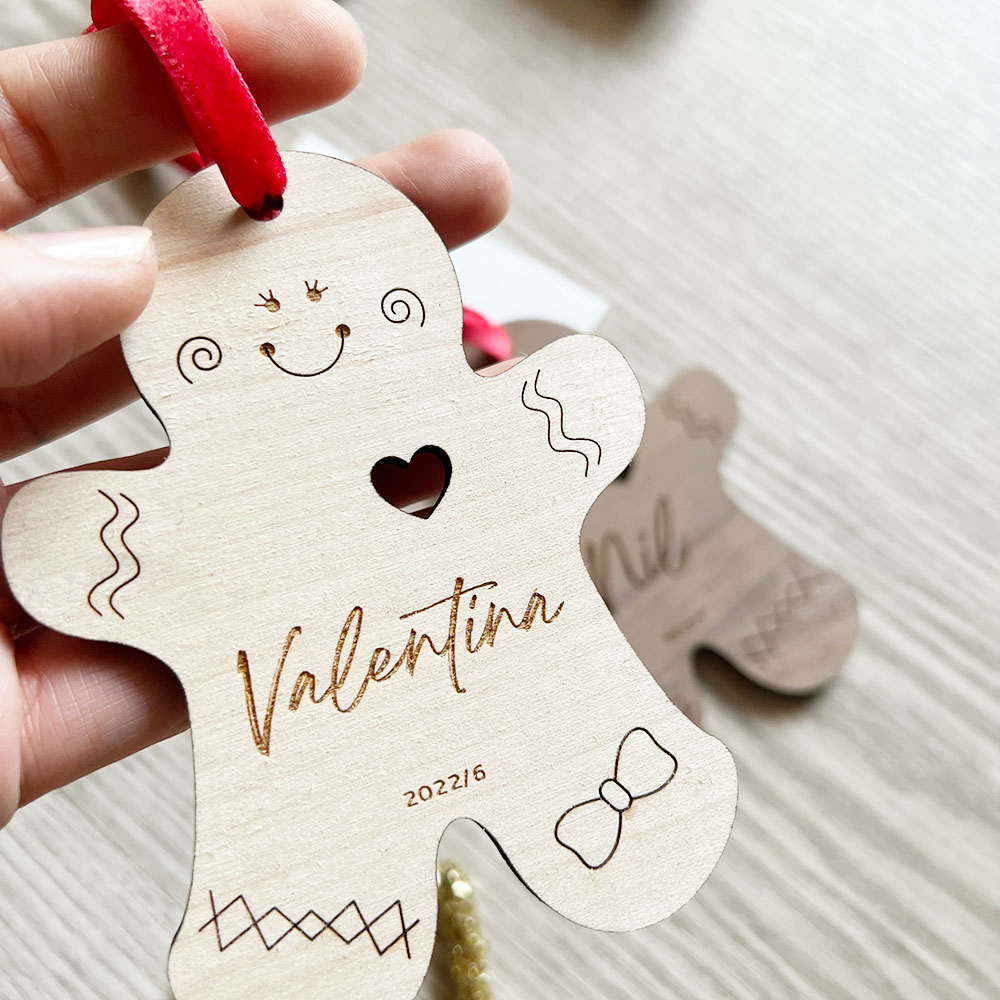 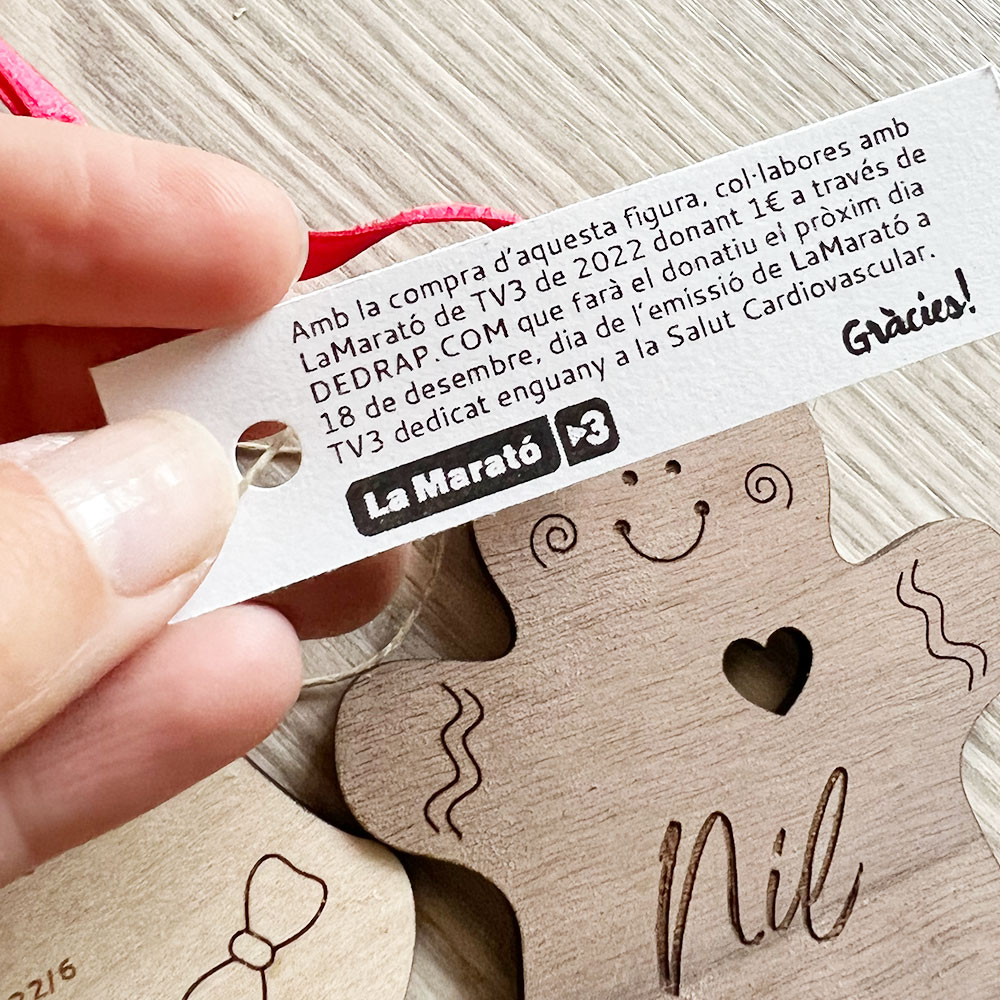 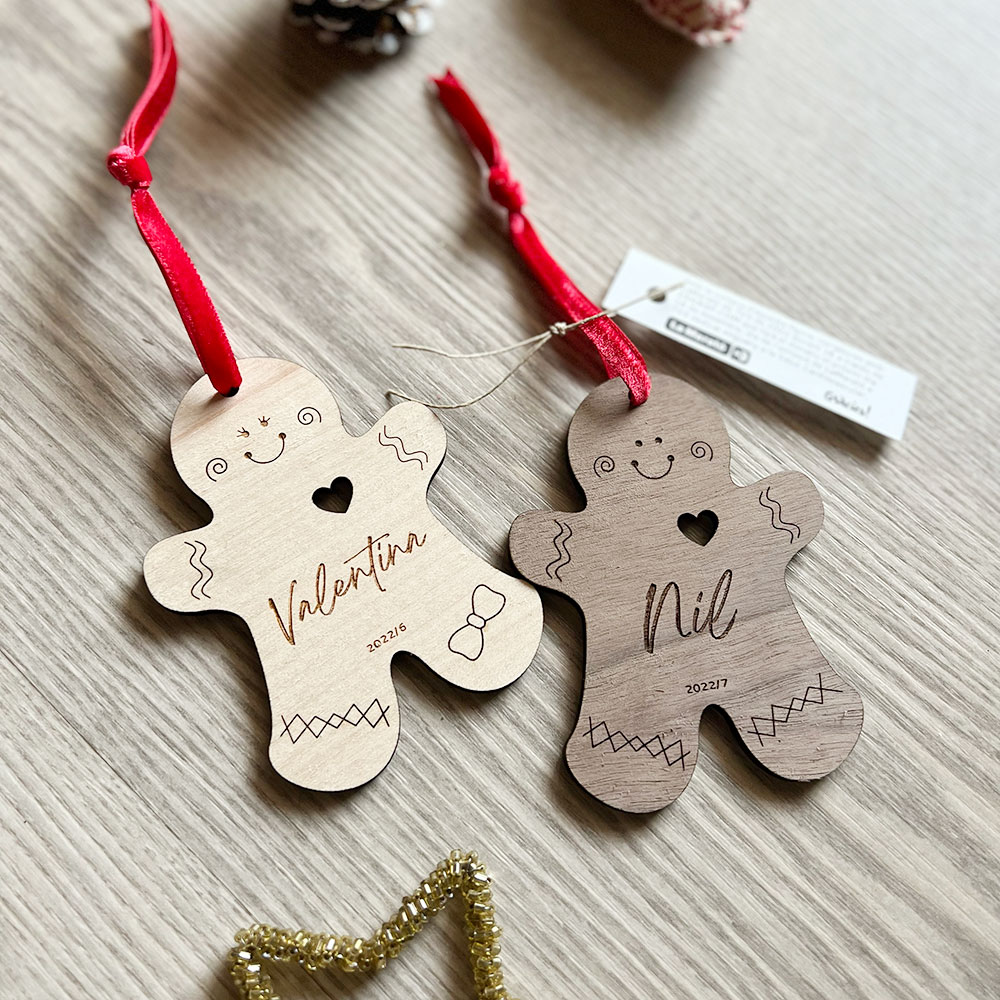 Last year we started a new very special project/initiative for us. It is a Limited Edition Christmas ornament that will be reinvented year after year and that also participates in solidarity with La Marató de TV3, this year dedicated to cardiovascular health. For years I began to collect a new and different ornament every year for the Christmas tree at home, following this idea we have created an annual ornament that will change every year.

Solidarity Ornament 2022:
· Dark or light wooden Gingerbreadman (or woman) personalized with the name or names you want (maximum 3)
· Each Figure is unique, is limited edition and will be engraved with the series number.
· From each sale, € 1 will be collected for La Marató de TV3, this year dedicated to cardiovascular health. Free shipping to the peninsula and islands through the Post Office, they will leave it in your mailbox in a few days)

Information about La Marató de TV3:
A solidarity project promoted by Televisió de Catalunya and the Fundació La Marató de TV3 since 1992. Every year funds are raised for research on a type of disease; each year a different type of disease. Every year an average of seven million euros is collected.
Its main objective is to raise funds to dedicate them to the research and dissemination of a disease or group of diseases. Over the years it has increased in prestige and donations to the point of creating in 1996 the "Fundación La Marató de TV3", which is in charge of managing the funds, choosing the best scientific projects for their financing and the campaigns of relevant awareness raising. Thousands of events are organized in Catalonia to raise money for the Marathon fund. This year the 30th edition of La Marató is celebrated.
More information: https://www.ccma.cat/tv3/marato/2022/290/ 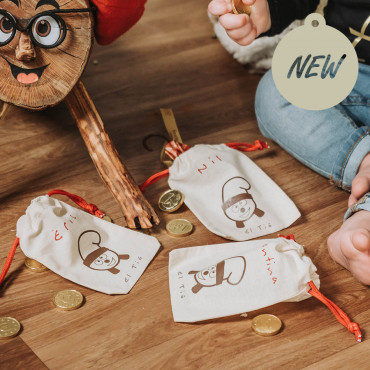 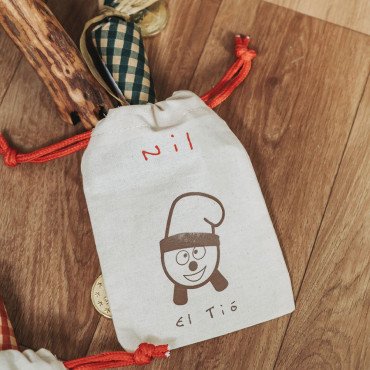 "Cagar el Tió" is one of the most special traditions in Catalonia, usually on Christmas night, December 24, families gather to poop the Tió. The Tió is an animated trunk with a barretina, which has been fed during the previous days by the little ones in the house. The day comes when he presents small gifts and sweets to the boys and girls of the family while singing his song. At Dedrap we have prepared personalized bags for all the Tions, with their names. Inside, you can put candies, chocolates, small toys... Bag size: 10 x 15 cm.Personalized with the child's name and uncle's graphic...